Have you ever heard about Yeosu? Yeosu is a city located in the southern part of the Korea Peninsula, about more than 400 kilometers from the Capital, Seoul.
Yeosu is quite famous back to 2012 when they host the World Expo. A special Expo complex built near to the harbor which transforms into popular tourist destinations up until now.
And for Korean Drama Lovers, Yeosu was filming-location of Bae Suzy's drama Uncontrollably Fond back in 2016.
I visited Yeosu in mid-June because the COVID-19 spread in South Korea has been slowed down and I need to go outside of Seoul. I have canceled two overseas trips during February and March because of COVID-19 and really need to make a trip to clear my mind.
So,  Yeosu is one of the destinations that I've been eyeing for a long time (2017 to be exact).
To go there from Seoul is quite easy, just hop on KTX Train from Seoul Station to Yeosu Expo Station for 2.5 hours. Or just fly with local airlines for a 1-hour trip. I took the first option.
So what's in Yeosu?
Aside from the blue beach, there are several tourist attractions for local and foreigner in Yeosu, I describe here based on my chronological visit:
1. Teddy Bear Museum, Yeosu
There are several Teddy Bear Museum in South Korea including in Jeju and Seoul. Yes, the Biggest one is in Jeju but every museum has a unique theme so it worth to be visited. Teddy Bear Museum at Yeosu is a bit smaller but still enjoyable. Most of all I love teddy bears.
The highlight Teddy Museum in Yeosu is the teddy bear painting portrayed famous painting like Renoir.
And there is a lot of other famous characters such as Mahatma Gandhi, Genghis Khan, and many more!
This place is so picturesque that you want to capture many photos inside! The ticket fare is about KRW8,000, cheaper compare to other Teddy Bear museums.
At the exit, you can visit the gift store and found a limited edition teddy bear that similar to Prince Lee Shin's in Princess Hour! It is so cute!
You can spend 1 hour in the museum just to cool off if the sun blazing outside!
2. Yeosu Cable Car 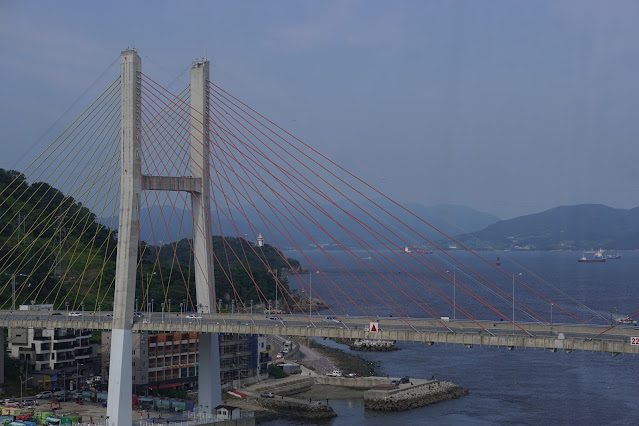 From The Teddy Bear Museum located in the Yeosu Expo complex, I walk along the coastline to the Cable Car Station. I heard that the view from Cable car at night is a killer, but I have another plan for tonight, so I decided to visit during the daylight.
I walked about 1.3 kilometers from the museum, but it is okay because the sun is shady and the wind rises frequently.
Even during the COVID season, I can say that the place is quite crowded. There were a lot of families who came there especially to ride the Cable Car.
There are two options for cable car: the crystal floor or ordinary car. I prefer the crystal but it is a bit expensive, about KRW 22,000 for returns ticket per person. If I am not mistaken, the ordinary car cost KRW 18,000 returns.
The queue is quite long, but once I hop on and the car start ascending above the sea, the view is spectacular!
I remember the almost same view (but this one better) back when I visited Kobe, Japan. I must say that crystal car is worth it because you can see the blue sea below your feet.
The viewfinder in your camera also screaming joyously, they transform like a drone!
I must say that the cable car is a must-visit in Yeosu. It is the highlight of my trip!
Once I arrive at the other end, I chill out at a cafe for several hours because of the heat. I took pictures from the scenic view from the 3rd floor before deciding to go back to the coastal area.
We can go back to the island via bus or ride back the Cable Car. I decided on the latter one because one trip is not enough for me!
Personally, I think Yeosu Cable Car is a must-visit when you are in Yeosu.
3. Odong Island
After riding back via Cable Car, my next destination is the famous  Odong-do. There is a pathway that crosses the ocean to reach the small island, maybe about 1 km long. Not as long as the Banpo Bridge though.
Summer in Yeosu is surprisingly mild. Not too hot or too cold in winter. The sea breeze brings a freshness that you can enjoy while walking around the island. So it is nice to walk between the main island to Odongdo together with many other people.
I read somewhere that the island is a home for Camellia blossom. The Camellias begin to bloom in November and color the entire island in scarlet until April the following year. The striking beauty of Odongdo made this spot so popular as dating place among couples.
Since I came during summer in June, there is no camellia in the scene but the greenery is enough to enjoy the shade, oxygen, and the sounds of a wave crashing the coral. There is a famous lighthouse that unfortunately closed during the Covid-19 Pandemic.
I spent 2 hours on the island. Visiting almost every spot in there, the cave, the lighthouse, bamboo shade, and many more.
There is a cafe near the lighthouse to drink whilst enjoy the shade in the mid of summer. The sound of the sea is like soothing medicine to calm your nerves. Even many people visit the island, it didn't feel crowded.
Frankly, this is one of my favorite things from Korea that I can visit nature spots whilst exercising without leaving the comfort of public facilities. The island is sparkling clean, there is a clean restroom, a nice traditional coffee shop and people mind their own business.
I spent almost 3 hours walking and exploring the island. Come back to the main island, I purchased a ticket of car train to cross the pathway. It is cost about KRW 2,000, they go every 20 minutes back and forth from Odongdo to the Main Island.
4. The Big O Show 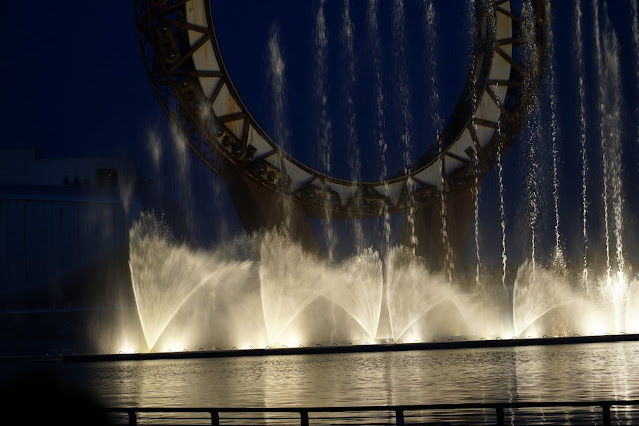 Soaking wet because of my sweat, we decided to come back to the hotel and freshen up before visiting our next destination.
The Big O Show is a laser and waterfall technology combine with catchy songs and a good story. The show started right after the sunset and last for 1.5 hours.
Actually, we don't know about the show but we saw the O construction and tribune on the coast part. We decided to watch it because it is highly rated in Naver.
And as I expected, it does not disappoint me at all. It is not spectacular but enjoyable! If you love Song of the Sea in Singapore, then this one is the best competitor.
The show narrated in South Korean Language but if you cannot understand the language, it is okay! by seeing the picture you will understand what is it all about. Most of all, the song is catchy and stuck in your head for several days
Actually, I forgot how much the entrance ticket. It is depending on your seat, but no need to buy the VIP ticket, just ask the locket keeper, which seat is the best (and cheapest) one, she will choose it for you and it is correct!
Since after the show, all the shops already closed, make sure you have your dinner before watching the show!
Right after the show, we were so tired and decided to come back to the hotel.
5. Hyengiram Hermitage
If you watched the Korean Drama closely, there are some drama took place at the beautiful temple at the top of the cliff and bordered by the sea, the famous Hyengiram Hermitage.
Early morning (at 09.00 am which too early for me), we decided to go to Hyengiram Hermitage which located about one hour away from Yeosu. We took a cab from the Yeosu Expo Station, simply it is because we don't want to arrive too late at the temple (you know the later, hotter).
Traveling time by taxi is about 40 minutes and cost about KRW 26,000. Meanwhile, if we go by bus, Naver informed us that it will take more than 60 minutes.
We arrive there quite early to beat the crowd, but in fact, there are crowds already, but not many as the later.
South Korea is a mountainous country, in which almost 70% of its land belongs to the mountain. And almost in every mountain, there is a beautiful Buddhist temple located there. Though Budha is not the biggest religion right now, I think if we trace back to history, before the King Sejong period, Budha is the main religion in the country. Christianity came later after the west come to the peninsula.
Since it is located up in the hill, the road to the temple is pretty steep. Not long but very steep. I think I took the wrong path because it is very quiet.
But the path is beautiful! Since it is a rocky mountain, we passed by a small gap between the big rocks which dark and wet. I am a bit afraid there will be bats in there because you know, coronavirus made me paranoid.
And once we arrived, the scenery is spectacular. There is a cafe near to the temple but if you think the cafe is too progressive in the middle of the nature scene, then you can just sit on the bench and enjoy the view.
We spent one hour at the top and come back after that (not including the hiking time). Afterward, we took a bus near to the temple and back to Yeosu. Well, riding the bus is also totally worth it because the scenery from your window is beautiful. No apartment sights-which mostly dominated Korea nowadays. And in fact, the bus trip only took about 50 minutes to the city.
We have lunch in the city and checking out the famous General Yi statue (which no bigger than the one in Gwanghwamun). After lunch, we decided to proceed with our last destination.
6. Hanwha Aqua Planet Yeosu

Actually, we are not too interested to visit the aquarium but we have time to kill before our train to Seoul.
The entrance ticket is quite expensive on the spot, so we bought the ticket via Trazy which 50% cheaper and we think it worth it.
In fact, I love it there! I always love animals and zoo but I have the paranoid to see the legless, long sea creature that I feared the most (cannot mention the name here).
The aquarium is a three-story exhibition which has quite a lot of sea majestic creature like a famous couple of Beluga or white whale. The Beluga is so huge that looks straight from the fairy tale. They seem active but with that size, they keep dancing in the water tank. I wonder how they feel If they have an option to dance in the sea.
I spent like almost half-hour watching they keep repeating their movement in a limited space and felt unnecessary sad for them. Don't get me wrong, they are beautiful and I am happy to have a chance to watch them. But they are so huge, I wonder are they feel being trapped? I hope not. 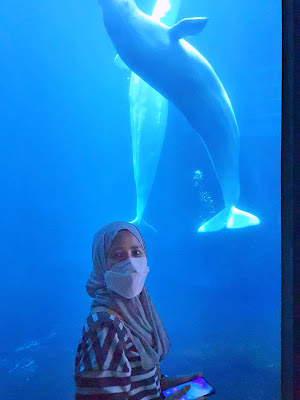 Additionally, what I love the most from the aquarium is I can see a lot of sea mammals and of course penguin. Meanwhile, the fish collection is quite various but not as immersing as the sea mammals.
We spent 2 hours at the Aquarium and have a really good time.
After that, we come back to Seoul and have 2.5 hours ride via train.
For weekend gateway, I think Yeosu is one of the best choices in Korea. There are a lot of interesting spots to visit! Or If you visit Korea and want to visit other than Seoul or Busan, then Yeosu is your third choice!
See you on my next trip! 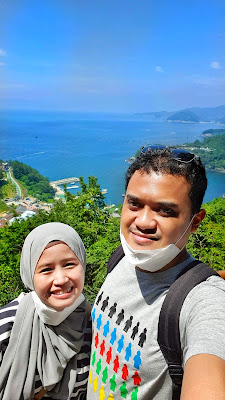 Must Visit Place to Enjoy Autumn in South Korea (Part I)