How Far you Willing to Take a Risk? 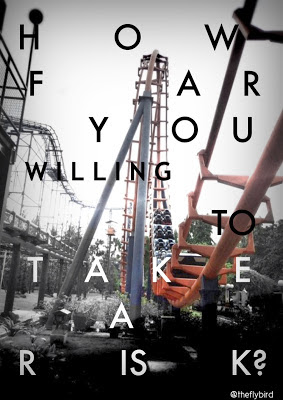 Past is the cause we are here now
Last week was my birthday. And like every year on my bday, I always inevitable melancholic.

May be my dear sorrow need to contemplate for awhile just for thinking about my past.

If I were asked about my past, and how'd I feel? I always said I'm satisfied enough, not all but enough. There were times when I done wrong thing and if I am able, I would love to repeat the time and come back.

But yes, that is just 'were', no second chance, never ever second chance!  So despite glooming about the past, I’d rather accept it.

But that is not the point I write this, last week on my birthday, I was home and that’s made me remember about my childhood and teenage time.

Long time ago, I never felt or realized that I am just a countryside girl. Ah yes, even my seniors pressing me when I was in high school just because I am no one from countryside (that’s definitely just in their state of mind), I never felt that I'm someone who live in rural could be a very different with someone whom living in the city. I always feel that I’m sophisticated inside.

But then, I am going to college and found the same person just like me, that’s made my feeling are remain the same. We are urban people (just because we live in capital city) no matter where we came from.

And then I live in Jakarta, the capital city of Indonesia. People said that living in here is harder than fight a stepmother (Indonesian folks believed that step mother is the most evil-living in this earth). But I never afraid, I always believe there is no such big different living in Jakarta and any other city in Indonesia (except for the cost of living).

So in Jakarta, I met a bunch of people whom time by the time realize me that I am just someone from countryside. That living in Jakarta is somehow different.

May be, you will guess that urban people (by this chance urban and rich people) is someone that cannot live without the idea of going to Shopping Center. Someone that go to fancy restaurant since their childhood and saw it as a very usual habit, someone that never using public transportation, someone who feels that the farm is one of travelling destination (as for me farm is my daily scenery).

Yes, you are right. Most of urban people (not immigrant) are like that.
I was so amazed when my friend told me that she and her family always go to fancy restaurant to have meal together, she even never went to hawker. Contrary with me, I and my family went to fancy restaurant is just once per month I guess, but almost every day we went to hawker enjoying local culinary. The great thing is I still love food from hawker as well as from fancy restaurant. And I never feel that eating in hawker can distinguished between urban and countryside people or between rich and poor people.
Shallow thinking, isn’t it? Indeed.
That's not all; the biggest difference between urban and rural people (from my view) is their price of security.
Something that sometimes irritates me, having a very urban friend is their incapability to challenge their bravery. Not a bravery thing like riding a rollercoaster or bungee jumping, but bravery to do something in real life. Bravery to ride metromini, bravery to walking on 'grey' area, or bravery to take a risk. Even when they are ride a rollercoaster they always double make sure that the ride is already secured.
Yes, secure. The urban people always have an assurance of security before doing something. By the chance in this case is a rich people whom living in the city.
I see this big different when it’s comes about healthy thing. I, countryside people, am very avoiding going to doctor unless I am very sick. Cold, light headache or mere fracture is 'usual' thing that no need to go to doctor. Different with them, light headache means full MRI to diagnose the core cause exactly. A mere itch on skin, they willing to take cancer maker just to make sure there is no skin cancer. You called it overwhelming thing? hmm..Don’t judge it first, but it is really happen. The cause is not just about their insecurity or their fright, but their habit and the vast knowledge. The great accessibility to Doctor, hospital, and their knowledge made them like that.
It is great somehow because usually they will be able to detect a disease earlier before it’s too late.
Different with countryside people even the rich one, they are more familiar to go to pharmacy than go to doctor. Light headache will be able to be cured by Panadol, Aspirin, and friends, cold will be cured by neozep, decolgen and mates, cough will be cured by OBH, conidryl, Vicks and brothers. May be once, they will go to doctor and if in the future they are experience the same thing, they'd prefer to go to pharmacy buy the same medicine as written on  previous prescription (they remember very well what disease and what medicine). The good thing is their easy mind will release them from insecurity, the scare of disease, but the bad thing is sometimes they detect a serious disease too late.
Well, the big gap among them is definitely the price of security.
Living in Big city made our awareness, or if I allowed saying: cautiousness getting bigger. Stranger is subject to be cautioned, disease is subject to be concerned even the not serious one.
The big difference is how familiar urban people with insurance product like car insurance, life insurance, even a small decision that takes a risk, they will consider the security.
They are willing to pay the big amount of money just for the feeling of being ‘secure’.
Don’t generalize the idea of free mind, made people care less about the pre-caution sense. Being free-mind doesn’t mean that people are irresponsible. If I allowed borrowing banking-definition, it is about risk appetite. Countryside people have higher risk appetite, the willingness to take a risk, than urban people. Both have the risk awareness, but different level of risk appetite,
I had a crazy idea the possible reason of first generation tycoon always succeed than the generation after. Their environment made them falling over and over hence made them stronger. Their risk appetite is higher, they are willing to risk every single asset they had because they ever experienced the downturn, and aware about the risk. Different generations who never experienced the downturn, may aware about the risk because they learn it but never felt it, that’s made a boundaries for them to decide how far they willing to take a risk.
That’s the logic.
There is nothing better and worse in this case. Every chain have two sides, every story have different angles. Being a countryside people who living in capital city never changes me becomes an urban people, but that’s made me realize the differences between us two.
Remember, being free mind is nothing to do with being irresponsible.